In July 2019, HealthMarkets surveyed more than 1,700 people of various ages, locations, and backgrounds throughout the United States to learn more about their health insurance plans and the coverage provided. Our goal was to analyze and compare the actual cost of health insurance and healthcare for both insured and uninsured individuals and their families. Do the plans cover what is needed? Are healthcare costs affordable? Continue reading to find a full briefing of the survey results.

The Breakdown of Health Coverage

In 2018, approximately 87 percent of Americans were insured, and 13 percent were not, based on data from the National Health Interview Survey from the CDC and the Gallup National Health and Well-Being Index. Our results matched that national average. Of the insured respondents, the majority have employer-provided plans (39.1 percent), followed by 29.3 percent with Medicare or Medicaid, 11.6 percent with an ACA plan, and 6.9 percent on a parent's plan.

The Difference in Monthly Premiums for Health Insurance Plans

Most Medicare and Medicaid recipients had lower monthly premiums, with the majority (86.4 percent) paying less than $251 per month. Only 9.3 percent of those with Medicare/Medicaid pay between $251-1,000, and only 4.4 percent pay more than $1000.

A Comparison of Monthly Out-of-Pocket Costs

We asked survey participants if they, anyone in their immediate family, or anyone covered under their insurance, experienced an event in the past year that caused them to seek emergency care (i.e., ambulatory care, urgent care or an emergency room). Respondents also reported on the total cost of the event and whether or not they could afford it.

Of those respondents with employer-provided plans, approximately half (46.7 percent) were able to afford the cost of an emergency, 39.2 percent needed six months or more to pay it off, and 14.2 percent could not afford the cost

of emergency care. Similarly, nearly half of those with ACA plans (47.8 percent) could afford emergency costs, and 30.4 percent required six or more months to pay off. However, a higher percentage of ACA plan-users said that they could not afford an emergency at all (21.7 percent).

Even though a high percentage of Medicare and Medicaid users enjoy low-cost premiums, 37.9 percent of those who had emergencies could not afford the related costs, and another 23 percent required at least six months to pay for the costs associated with the emergency.

For someone without insurance, an em

ergency can be costly. Of the uninsured who had a medical emergency in the last year, 80 percent paid more than $500 out of pocket (compared to a much lower percentage for those with insurance). Of those who did seek medical care for an emergency, more than half (51.6 percent) cannot afford the cost associated, and 29.5 percent needed six or more months to pay it off.

Respondents were also asked if they had been diagnosed with a chronic or pre-existing condition, such as asthma, cancer, diabetes, heart disease, etc. Data was gathered on the cost of care related to these conditions, and, for those insured, if it was covered under their plan.

Even when chronic and pre-existing conditions are covered under health insurance plans, the insured are still responsible for the out-of-pocket costs associated with healthcare. Of the three groups of insured individuals, those with employer-provided plans had the highest percentage of members who reported that they are able to pay the costs related to their condition (73.7 percent). This is followed by the ACA group, with 66 percent reporting that they can afford the cost, and then the Medicare and 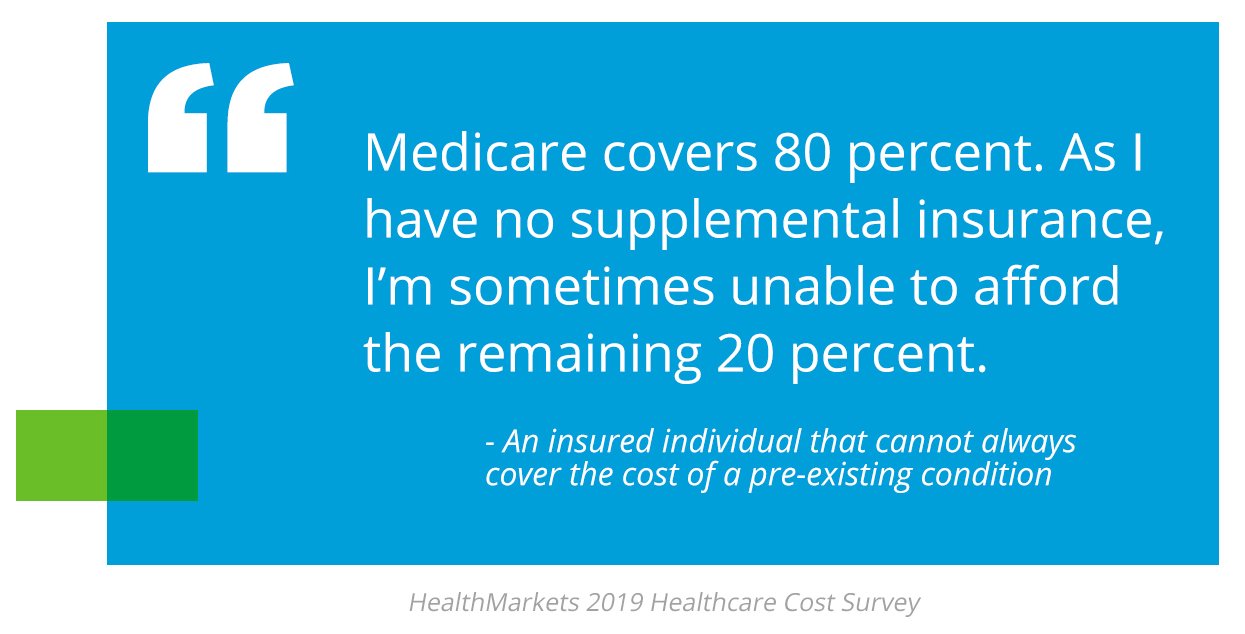 For the insured who reported they can only sometimes afford the costs of their medical condition, reasons such as high copays or deductibles and dependence on their monthly income and budget, were commonly given.

Respondents also mentioned that the costs of medication and prescriptions can fluctuate and they don’t understand the reasons why. In such cases, it would be useful to speak to a licensed insurance agent who can help recipients understand their coverage levels and the costs for medication, care and therapy treatments. While lower monthly premiums are attractive, choosing a plan with a higher premium and more affordable copayments and drug deductibles can help save money in the long run.

The uninsured face tougher situations with chronic and pre-existing conditions. More than half (51.7 percent) cannot afford the costs associated with their conditions, and nearly 7 percent can only sometimes afford it.

As the data shows, it’s important for people without insurance to talk to a licensed insurance agent to see what kind of coverage and assistance is available. An agent can check for available subsidies and additional savings that reduce out-of-pocket expenses, making the cost for coverage much more affordable. There are even savings available to help qualified individuals reduce the cost of prescription drug coverage.

The Cost of Healthcare for Insured and Uninsured Americans

Recent reports show that those with Medicare and Medicaid report high satisfaction with their coverage. As this survey data shows, the low cost of premiums and out-of-pocket expenses for this group could contribute to this rating. However, when it comes to affording the cost of emergency care, caution should be given, as the insured can still encounter high-costs for this type of care.

Uninsured individuals face high costs when it comes to healthcare for both emergencies and chronic or pre-existing conditions—both of which the majority cannot afford.

Whether you are uninsured and searching for coverage or insured but looking to see if you have the right plan, HealthMarkets can help. HealthMarkets has thousands of trained and licensed insurance professionals nationwide that can help you find plans, check for subsidies and compare coverage, so you can make the right decision for you and your family. Best of all, our service comes at no cost to you. Give us call us at (844) 294-0966.

The survey was conducted by 10x digital, Inc. on behalf of HealthMarkets via Pollfish.com. In July 2019, we surveyed 1800 individuals of different demographics to assess the cost of their health insurance plans (if applicable) and overall healthcare costs, over the past year. Our sample population represented 87 percent of participants with health insurance plans and 13 percent of participants that were uninsured.